Almost all of us have picked up enough facts about how our world turns through space just by existing. Most of us forget our observations–for example, we see the Sun every day, so we never pay enough attention to know where it will be in the sky during daytime–but that doesn’t mean we don’t know them. During astronomy programs where I’m not manning a telescope (which requires too much attention to go off and chat with people for extended periods of time. The telescope has to be adjusted after about every two people who look through it, so approximately every ten seconds depending on where in the sky it’s aimed) my absolute favorite thing to do is to bring that knowledge to the forefront of their minds.

DO YOU KNOW WHAT YOU’RE LOOKING AT?

THERE ARE TWO PLANETS IN THE SKY. DO YOU KNOW HOW TO FIND THEM?

First I find a small group of people standing outside the telescope lines, usually staring up in awe at the stars. I approach, introduce myself, and ask some leading questions to discover how much background knowledge they have in astronomy. I often get visitors who have never gone to a truly dark sky before and have no idea what they’re looking at or in what direction they’re looking.

I don’t think I’ve ever gotten a yes from this question. I ask it expecting a no. My goal is to help them figure out where the planet is for themselves. You might consider it a tall order, what with the thousands of stars in the sky that could each be a planet, but I don’t share that opinion. It can take a long time, and it’s helped by Seattle’s light pollution in the east blocking out a lot of the stars surrounding the two planets that appear there over the course of our program, but I’m absolutely certain any person I talk to could figure it out.

WHERE WAS THE SUN TODAY?

This might be my favorite question to ask. Most of our visitors have been up to Hurricane Ridge in the daytime already. The views up there are gorgeous, so they probably spent a significant amount of time looking out at the horizon. And yet, they very rarely remember where the sun was. I usually let them stew a bit–I like it when they spin around as if they’re looking for it or when someone else chimes in to try and help–before I ask them if they know where the Sun just set. Most people arrived while there was still color in the west, so they find it reliably enough.

If that’s where the sun set today, then where must the sun have risen? Luckily, if someone already knows the Sun rises in the east they can find east quickly after that. Most of the questions I ask are meant to make folks think, so it’s nice to sprinkle some easier ones in to build confidence. This is also why it’s important to approach someone in a group. If you approach a sole individual with this kind of technique, you might have the undesired effect of making them feel singled-out, put on the spot, or even stupid. No one likes to not know the answer to a question and you should always keep that in mind when engaging in interpretation. 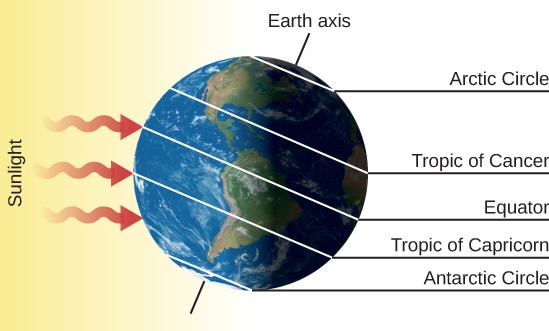 If they don’t know that’s A-okay. If I have the time and they’re enjoying the questions, I’ll give them clues to help them find the answer. I might go the route of saying that the only places on Earth where the sun is ever directly over your head are around the equator. In that case, the sun must be ‘directly facing’ the equator, or at least a place near it. I would then ask “Where is the equator in relation to us, south or north?” South. “Then where must the Sun be during daytime here, if during the day the sun is ‘at’ the equator?” South. If I don’t have the time, or if their body language/voice tells me they might be frustrated, I’ll just give them the answer.

Now, when I tell someone from the equator that the sun faces the equator, they usually agree with me. They would have observed at some point that back home the sun is higher in the sky than in Washington. But if I asked this theoretical person “where on Earth does the Sun face?”, they probably wouldn’t have been able to tell me. That doesn’t mean they don’t intuitively know the answer.

On Hurricane Ridge, we’re at about 48 degrees latitude north of the equator, which means the sun is always in the southern sky.

EVERYTHING FOLLOWS THE SUN

The path the sun takes across the sky is the same path the moon and planets take. It’s called the ecliptic. Why?

Folks are sometimes taken aback by this kind of question. Previously, I had told them the reasoning (the “why”, such as the Sun being at the equator) and then asked them to deduce the result (such as the Sun being in the southern sky in Washington). But it’s good to mix things up. If they seem stuck, I’ll ask them to recall a model of a solar system they’ve seen on TV or in a science fair and tell me what it looked like. If the model were to line up the planets in those models, would the planets end up in a row, or would they be all jumbled up in random places? They would be in a row. When revolving around the sun, do they make a shape like a flat plate or a sphere? A plate, otherwise known as a plane.

Pluto doesn't orbit within the orbital plane, which is the main reason why it's no longer considered a planet.

Our solar system is a plate and we’re inside it. As a result, the planets, sun, and moon appear to be ‘lined up’ in our night sky on a very specific path. This path is curved because the Earth is a sphere.

At this point, I trace the ecliptic through the sky with my laser. If there’s a planet in the sky tonight, it’s somewhere on this curve. …very bright. They don’t produce any light, but they’re so much closer than anything else in the night sky except for the moon and they reflect the light of the sun just like the moon does. In fact, they’re bright enough that you can see them even in a city.

Like the sun, planets rise in the east. Out of the two planets out this August, one rose about an hour after Sunset and one rose a few hours before Sunset. If they just rose, what part of the sky are they not in?

The west. So they must be in the east and southeast.

At this point, most people have found them. Hurray! But we’re not done yet.

WHICH PLANETS ARE THEY?

One is very bright, bright enough to be a plane, and one is still brighter than the stars around it but not by much. The latter rose earlier and is higher in the sky than the former.

For a planet to be in the night sky, is it closer to the Sun than we are, or further? This one takes a minute to think through, so I often demonstrate. I treat one visitor like they’re the Sun, one like they’re the Earth, and myself like I’m the planet. Once I do this, most pick up on the fact that if a planet were to be closer to the Sun than us, you would never see it at night. Only planets further from the Sun than us can be seen at night, although you might also spot them during Sun rise at certain points in their orbits.

Do you remember which planets are further from the Sun than us? Mars, Jupiter, Saturn, Uranus, and Neptune. Uranus and Neptune are so far away they can only be seen with a telescope (although Uranus can sometimes be seen with the naked-eye, you have to have very good eyes). So, that leaves us with three options. All three of them are bright and can be seen with the naked-eye, but for that particularly bright one to be that much brighter than the other, it must be really, really big. That makes it…

Meanwhile, Mars is very, very red, and this last dot is not. That means it must be Saturn. 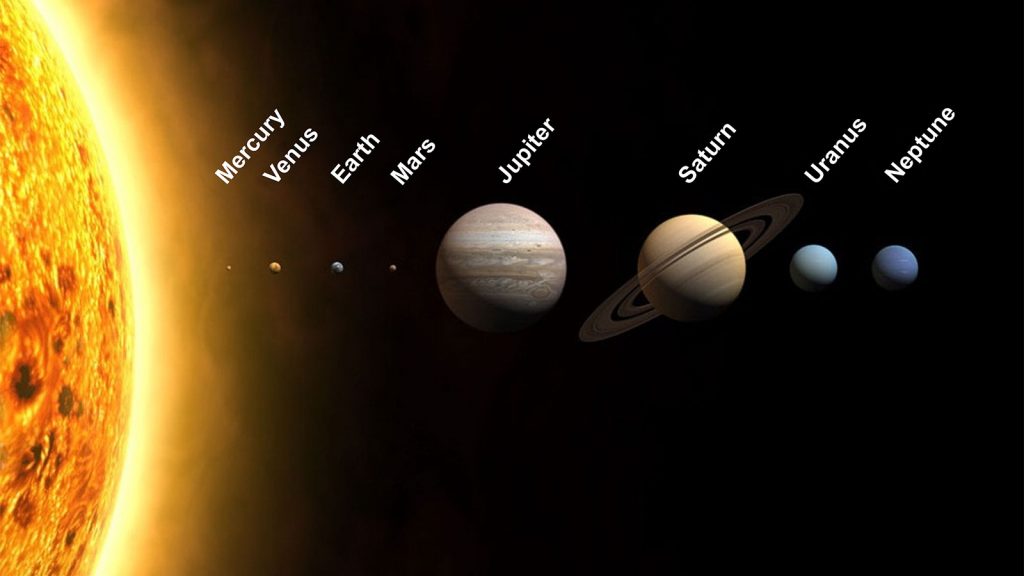